For years now I’ve enjoyed doing yoga in Times Square on the night of the summer solstice. It’s become a deeply personal ritual, performed in a very public place. 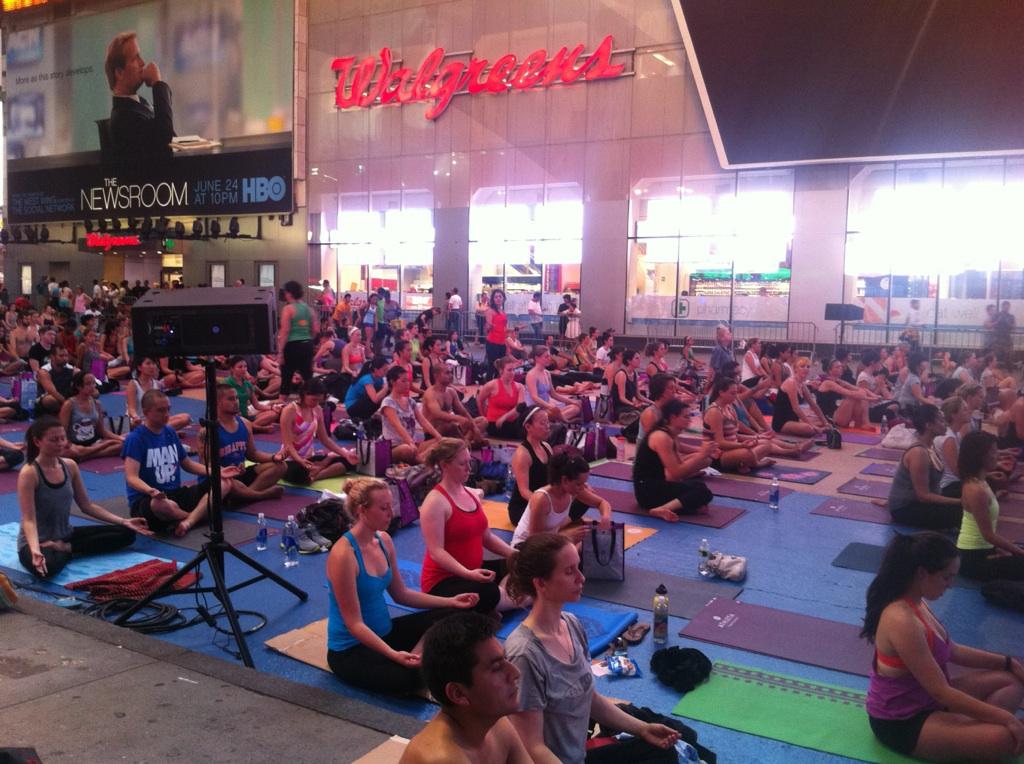 Bright lights, big ads, chain stores…What could be more relaxing?
(This is near the end; I’m sitting up and stretching.)

This year the solstice was on Wednesday, June 20. I pre-registered for class back in April and the date took top priority; I shuffled several events in my schedule to accommodate it. And then, along came Wednesday, June 20, and I did not feel like doing yoga.

Or more accurately, I did not want to practice asana, and especially not in vigorous vinyasa style. I hadn’t gotten much sleep on Saturday, Sunday, Monday, or Tuesday nights, and I was leaving town on Thursday, and so on Wednesday I really just wanted to rest.

And that’s exactly what I did. I arrived an hour early, because I expected a crowd and wanted to be sure and secure a mat and a space. Rather than push my way toward the central staging area around 45th Street, where I’ve participated in the past, I took the path of least resistance and situated myself near the check-in station at 43rd Street and Broadway, far from the heart of the action.

As soon as my mat was down I settled into a welcome savasana and faded in and out of consciousness until the crackle of speakers brought me back to my surroundings. After a couple of introductory announcements, it was time for class.

The instructor was energetic, the crowd was enthusiastic, and I was still in savasana. Audibly psyched to be coaching thousands of yogis in Times Square (NEW YORK CITY!), the teacher implored us to share her joy, to find meaning for ourselves in what she was offering.

And suddenly I realized that for me, what would be meaningful would be to honor my truth: I absolutely did not want to move. I wasn’t feeling the instructor’s energy, but I didn’t have to make a big deal out of it. I could listen to her words, respectfully appreciate them, and meditate in stillness instead of in motion.

I’ve sometimes wondered what it would be like to stay in savasana for an entire class. It’s one of those things you can technically do anytime, but I’ve never seen it happen. Personally, if I’ve paid for a yoga class, I feel like I’m missing out if I’m not moving. And while I’ve gotten good about taking child’s pose when I need it, there’s something about lying down for a straight hour that just seems lazy or disrespectful. (Not that I’m judging!)

But, all judgment aside, I committed to staying still last Wednesday. It was more challenging than I expected, especially at first. I felt both guilty and rebellious, and had to close my eyes in order to become comfortable. But before long I was content, listening closely and holding the poses in my imagination.

The more I concentrated, the more it felt like I was actively engaging–except my breath was steadier than it would have been had I tried to match the instructor’s rapid pace, and I wasn’t perturbed or confused when the speakers went out for a while. The sudden silence was welcome, and I knew exactly where my body was meant to be.

At one point a spotter (yoga teachers volunteered as assistants for the event) tapped me on the shoulder to make sure I was okay. “I’m good. I’m just chilling,” I told her with a smile, and gratefully sank back into my reverie. Another time a different spotter approached and asked if she could give me an adjustment. I felt like the luckiest yogi in Times Square as she pressed down on my shoulders, then below my collarbone, and then at my temples. “Man,” I thought as she gently touched my third eye, prompting a trippy visual sensation, “I’m getting rewarded for relaxing.”

Meanwhile, hundreds of people around me had been standing and lunging and balancing and flowing, and moments after my masseuse left me melted into the cement, the crowd was told to hop on one foot and shout “I’m free!” That was when the guy next to me jumped with full force onto my fingers.

But even the sudden shock of excruciating pain didn’t bother me too much. It was a bold reminder that despite my capacity for joy, I am never immune to suffering. Yet distress doesn’t stay when I am willing let it go. So I breathed soothing exhales toward my fingertips, and class went on.

Nearly two hours later, I stood up. By that point I was restless; the longest I’d ever stayed in savasana before last Wednesday was for a sixty-minute yoga nidra meditation I do sometimes at home, and that’s usually on my bed and not concrete. So somewhere around ninety minutes I’d had to sit up and start stretching. But I stayed seated until the final om, and when it was over, I felt well and truly restored.